I was looking for a way to visualize an interesting way to show what means making research on blood, a way to engage and understand this concept as much as possible. I decided to start from the blood, trying to reduce the data and amplify senses.
I chose the blood unit, a cubic millimeter. It contains about 5 million between white and red blood cells. I built around this figures a tactile and visual experience. I used a variation of Conway’s "Game of Life" to create a generative book containing all the cells in question. Square shaped, it was the result of a cubic array of 171 elements. In this way you can hold in your hand and browse a unit of blood, you can perceive its weight, and you can visually understand the complexity and the amount of data within a tiny unit of material.
On the basis of the same algorithm I realized with my device a series of panels on which multiple layers of distributed Cellular Automaton use different signs, gradually more complex from point, to line and surfaces so that this could mix the tactile sense to the vision, a large installation that take the viewer within the same logic.

A Cellular Automaton (CA) is a discrete model studied in computability theory and other science fields consisting of a regular grid of cells, each in one of a finite number of states, such as on and off. It is perhaps the simplest example of autonomy and I decided to program a variation of it as a starting point for my project NORAA. The artist’s book is a three dimensional CA version, and it’s been presented during my exhibition crossing-over at HangarBicocca. 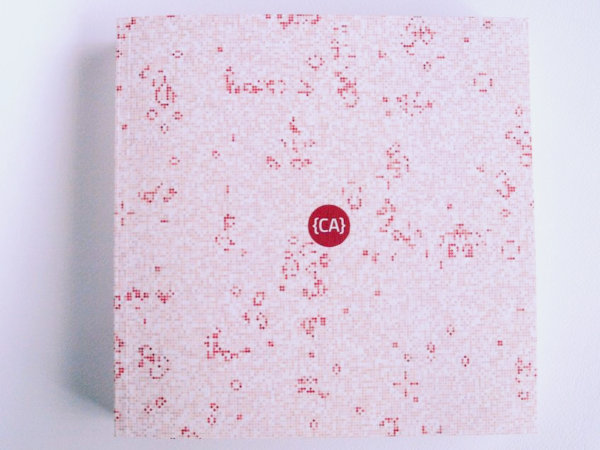